October, November and MARCH: How Has the Weather Changed? 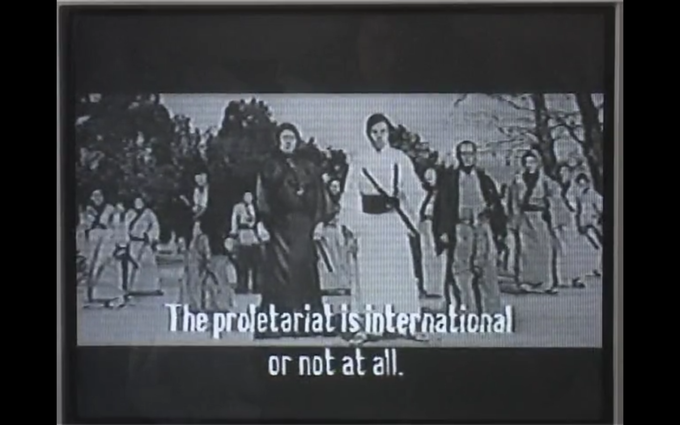 October, November and MARCH: How Has the Weather Changed?

This event is free and online: RSVP

“We are in the period of November, when revolution seems to be over, and peripheral struggles have become particular, localist and almost impossible to communicate. In November, the former heroes become madmen and die in extra-legal executions somewhere on a dirty roadside and information about it is so diffused with predictable propaganda, that hardly anyone takes a closer look.”

In a scene from Hito Steyerl’s November (2004), we hear these words distinguish between the revolutionary days of October and “ours” as the artist is seen participating in a protest against the US and allies’ invasion of Iraq. Yet, that ‘present’ is now sixteen years old and separated from our present by a pandemic which has caused over 1.5 million deaths worldwide, global uprisings in defense of Black lives, massive deportations and barring of asylum seekers, major housing and student debt crises, drone assassinations and proxy wars, oil spills and environmental catastrophes – alongside  ever louder calls for the abolition of the institutions of capitalism: the police, the prison and the military, among others.

In its inaugural print edition, MARCH: a journal of art & strategy occupies the first issue of October (itself a direct reference to the 1917 October Revolution) in order to reopen an inquiry into the relationship between revolutionary practice, theoretical inquiry and artistic innovation in our time. Through this process we ask: Can publication (the act of making public) be an act of protest (public making)? Can publication be thought of spatially and materially as a consequential conspirator? Incendiary insurrection? What strategies do (and can) we employ? Towards what goals? Can an abolitionist framework be applied to the institution of art? Can we avoid the pitfalls of allegorical thinking?

Human Resources was founded in 2010 by a team of creative individuals who seek to broaden engagement with contemporary and conceptual art, with an emphasis on performative and underexposed modes of expression. Human Resources is not-for-profit and seeks to foster widespread public appreciation of the performative arts by encouraging maximum community access. Human Resources also serves as a point of convergence for diverse and disparate art communities to engage in conversation and idea-sharing promoting the sustainability of non-traditional art forms. We are a volunteer organization. https://www.h-r.la/

MARCH: a journal of art & strategy embraces publishing as an act of protest to address the critical social and political issues of our time. MARCH was founded in 2020 by Sarrita Hunn and James McAnally as an expansion of their previous publication, Temporary Art Review (2011-2019). MARCH features an annual print edition alongside an active online platform commissioning essays, interviews, and experimental critical writing with a global perspective. https://march.international/

Sarrita Hunn is an interdisciplinary artist, editor, curator and web developer whose often collaborative practice focuses on the culturally, socially and politically transformative potential of artist-centered activity. She is the co-founder and editor of MARCH, a journal of art & strategy; artistic coordinator for Saas-Fee Summer Institute of Art; and managing editor of artbrain.org. Additionally, she is a founding member and co-chair of Liebe Chaos Verein e.V. and founding member of the queer cyberactivist collective Cypher Sex.

Nora N. Khan is a critic, an educator, and a curator. She is on the faculty of Rhode Island School of Design, in Digital + Media, and has two short books: Seeing, Naming, Knowing (The Brooklyn Rail, 2019), on machine vision, and with Steven Warwick, Fear Indexing the X-Files (Primary Information, 2017). Forthcoming this year is The Artificial and the Real, through Art Metropole. She is currently an editor of Forces of Art: Perspectives From a Changing World, alongside Serubiri Moses and Carin Kuoni.

Gelare Khoshgozaran is an undisciplinary artist and writer who, in 2009 was transplanted from street protests in a city of four seasons to the windowless rooms of the University of Southern California where aesthetics and politics were discussed in endless summers. Gelare is a keyholder at Human Resources.

James McAnally is a strategic critic and dependent curator based in St. Louis, MO. He is the co-founder and editor of MARCH: a journal of art & strategy, the co-founder and director of The Luminary, an expansive platform for art, thought, and action, and a founding member of Common Field, a national network of independent art spaces and organizers. McAnally is a recipient of the Creative Capital | Andy Warhol Foundation Arts Writers Grant for Short-Form Writing.

Serubiri Moses is a writer, editor, and curator, and currently Adj. Asst. Professor in the Art and Art History Department at Hunter College. He is co-curator of the 5th perennial contemporary art survey, Greater New York (2021), founded in 2000 at MoMA PS1, Long Island City, and previously was on the curatorial team of the 10th Berlin Biennale of Contemporary Art (2018). His current research focuses on theories in African visual art and art exhibitions.

Zoé Samudzi is a writer and doctoral candidate in Medical Sociology at the University of California, San Francisco. Her writing has appeared in The New Republic, Art in America, The New Inquiry, The Funambulist, and other places, and she is a contributing writer at Jewish Currents. Along with William C. Anderson, she is the co-author of As Black as Resistance: Finding the Conditions for Our Liberation (AK Press, 2018). She is currently a fellow with Political Research Associates.

Andrea Steves is an artist, curator, researcher, and organizer currently based in Brooklyn. Her recent projects deal with museums and public history, monuments and memorials, and the complex legacies of the Cold War. Andrea also works in the collective FICTILIS and the Center for Hydrosocial Studies, and is co-founder of the Museum of Capitalism. She is currently a visiting scholar at the Center For Capitalism Studies at The New School.