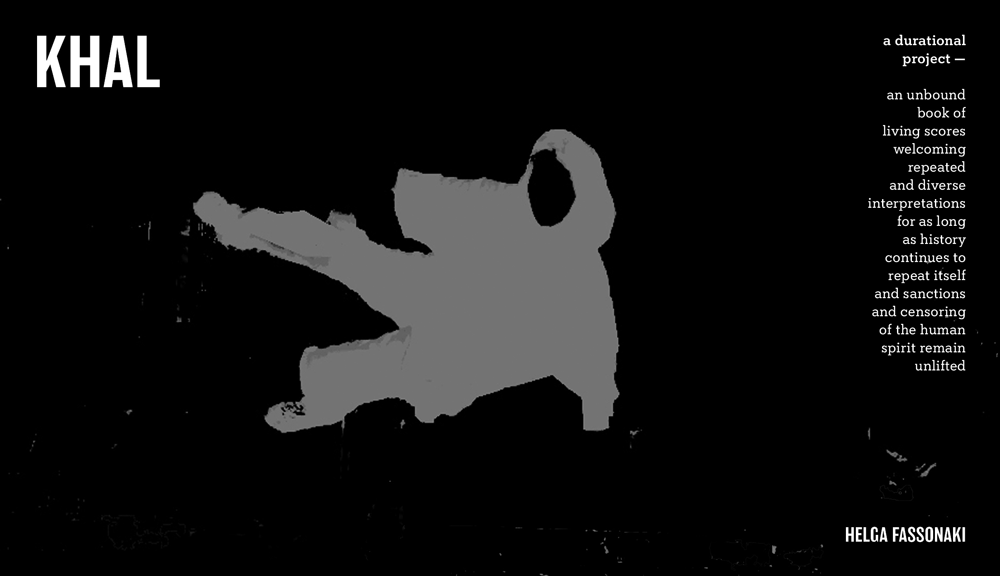 Helga Fassonaki began the Khal project in 2014 while living in Tabriz, Iran for a month. As a visual artist in Iran, what she was able to share in public was restricted. Furthermore, as a female performing artist, the use of her voice in public performance was restricted.

After the establishment of the Islamic Republic of Iran in 1979, Ayatollah Khomeini “condemned all forms of music, other than classical and traditional Persian music” as being corrupted and influenced by Western culture, and therefore, forbidden. During this time, Khomeini also forbade women from singing solo in public because of “the seductive quality of the female voice”.

Since performing as she chose was illegal in Iran, Fassonaki sent compositions in the form of sculptural scores created in Tabriz to sixteen female artists and musicians living in different cities and parts of the world. The concept being that the scores be interpreted and performed publicly by these artists in lieu of Fassonaki’s ability to do so.

These “living scores” were then passed on to other participants to be interpreted and performed, creating in the process an open book of socio-spatial exchange. Iterations of Khal were exhibited at Glasshouse (Brooklyn, NY), Los Angeles Contemporary Archive (Los Angeles, CA), Disjecta (Portland, OR), the Auricle Sonic Arts Gallery (Christchurch, NZ), the 2015 Audacious Festival of Sonic Arts (Christchurch, NZ), Audio Foundation (Auckland, NZ), Viewfinder (Auckland, NZ), and Nga Taonga Sound & Vision (Auckland, NZ). As the series unfolds from one event to another, a cumulative composition of voices and actions will continue to grow until the law inhibiting artistic expression ceases to exist. This ongoing exchange and peaceful protest refers to the derogatory use of the Farsi word “khal,” coined to describe the passage of Iranian pop music in the form of homemade mixtapes. Once pop music was no longer being produced or sold in Iran after the Islamic Revolution, the Los Angeles Persian community sent mixtapes to residents in Iran so they could listen to their own country’s pop stars. Fassonaki remembers partaking in this movement when she was a kid residing in Los Angeles.  The steady flow of cassettes soon became state-approved in Iran, an example that gentle poetic actions can push through governing law.

After years of gathering and communicating with a growing number of participating voices, Fassonaki is thrilled to present a dedicated publication – a living archive of drawings, interviews, compositional notes, and recordings, published by Sming Sming Books and  Drawing Room Records.

Human Resources is pleased to present a two-day publication launch and exhibition on March 19 and 20, featuring the publication hot off the press, an installation of sound, artifacts and drawings, a video screening featuring one of Maryam Bagheri Nesami’s interpretations for “One Song Two Sides Bold Breathing – The Missing Score”, and a video archive featuring public performances of every artist who performed one of the scores.

Preserving Fassonaki’s original idea where each presentation of Khal is a new iteration as well as an ongoing archive, the launch will include live performances by new artists who have been chosen by some of the original recipients of the scores. The two-day launch will conclude with a special dinner hosted at Human Resources that will mark the beginning of spring and the Persian holiday of Nowruz.   Details on both events will be announced soon.

The publication of this project was made possible, in part, by a recently awarded Foundation for Contemporary Arts Emergency Grant.

Helga Fassonaki is a multi-disciplinary artist and curator of Iranian-Azeri decent, born and currently residing in Los Angeles. Her work crosses fields of nature, sound, video, performance, and installation. She performs solo as yek koo, a project begun in 2006, exploring the body as a vehicle for the movement of sound and duo in Métal Rouge (with Andrew Scott), formed in 2005.  In 2017, Fassonaki founded untune, a socio-curatorial project with a series of programming dedicated to the term “Social“. Her work solo and in collaboration, has been presented at MOCA (Los Angeles), LACA (Los Angeles), Whitney Museum of American Art (as part of the Whitney Biennial 2014), LACE galleries (Los Angeles), Human Resources (Los Angeles), Audio Foundation (Auckland), Blue Oyster gallery (Dunedin), Box Gallery (Los Angeles, CA), Disjecta (Portland), Zebulon (Los Angeles), Café Oto (London), Vox Populi (Philadelphia) among many others.  Fassonaki is currently working on an ongoing series called 100’ Circles, which attempts to address the changes/transitions/cycles (historic, social, natural, environmental) of specific land masses around the world. So far she has created a 100’ Circle in Vanier Park, Vancouver;  Joshua Tree, California; and the Berkshires, Western Massachusetts.