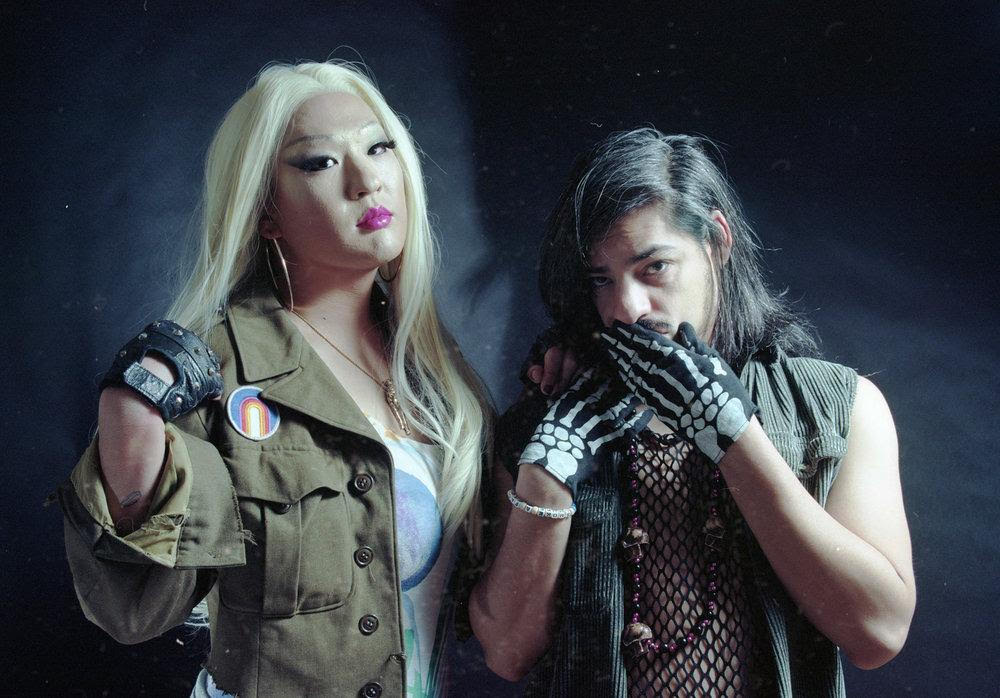 Xina Xurner​ is an experimental music/performance collaboration between Marvin Astorga And Young Joon Kwak, whose cathartic performances combine DIY and power electronics, mutated vocals, and bad drag to expand ideas about queer and trans bodies. Their music combines a variety of genres (including happy hardcore, industrial, drone metal, and techno), in order to create sadical and sexperimental noise-diva-dance anthems that evoke a sense of transformation, rebirth, and renewal. Xina Xurner released their debut album “DIE” in 2012 and their follow-up, “Queens of the Night,” was released in April 2018. Xina Xurner will make you sweat.
https://xinaxurner.com/
Photo by Christopher Richmond

M. Lamar is a composer who works across opera, metal, performance, video, sculpture and installation to craft sprawling narratives of radical becomings. Lamar holds a BFA from The San Francisco Art Institute and attended the Yale School of Art, sculpture program, before dropping out to pursue music. Lamar’s work has been presented internationally, most recently at The Cloisters at The Metropolitan Museum Of Art, Funkhaus Berlin Germany, Kunstgebäude Stuttgart, The Meet Factory in Prague, National Sawdust New York, The Kitchen New York, MoMa PS1’s Greater New York, among others.
Photo by Johnny Q

Johanna Hedva is a Korean-American writer, artist, musician, and astrologer, who was raised in Los Angeles by a family of witches, and now lives in LA and Berlin. They are the author of the novel, On Hell (2018, Sator Press) and their writing has appeared in Triple Canopy, The White Review, and Black Warrior Review. Their work has been shown at The Institute of Contemporary Arts in London, Performance Space New York, the LA Architecture and Design Museum, and the Museum of Contemporary Art on the Moon. Their album The Sun and the Moon was released in March 2019. Since 2018, they’ve been touring Black Moon Lilith in Pisces in the 4th House, a drone metal guitar and voice performance influenced by Korean shamanist ritual.
http://johannahedva.com/
https://bighedva.bandcamp.com/
Photo by Mengwen Cao

Gabie Strong is interdisciplinary, conceptual artist exploring sonic constructions of drone and decay as a means to improvise new arrangements of feminist meaning. She uses the guitar in acoustically violent ways to create noise as both an exploration of bodily listening and as a critique of femininity.
http://gabiestrong.com/