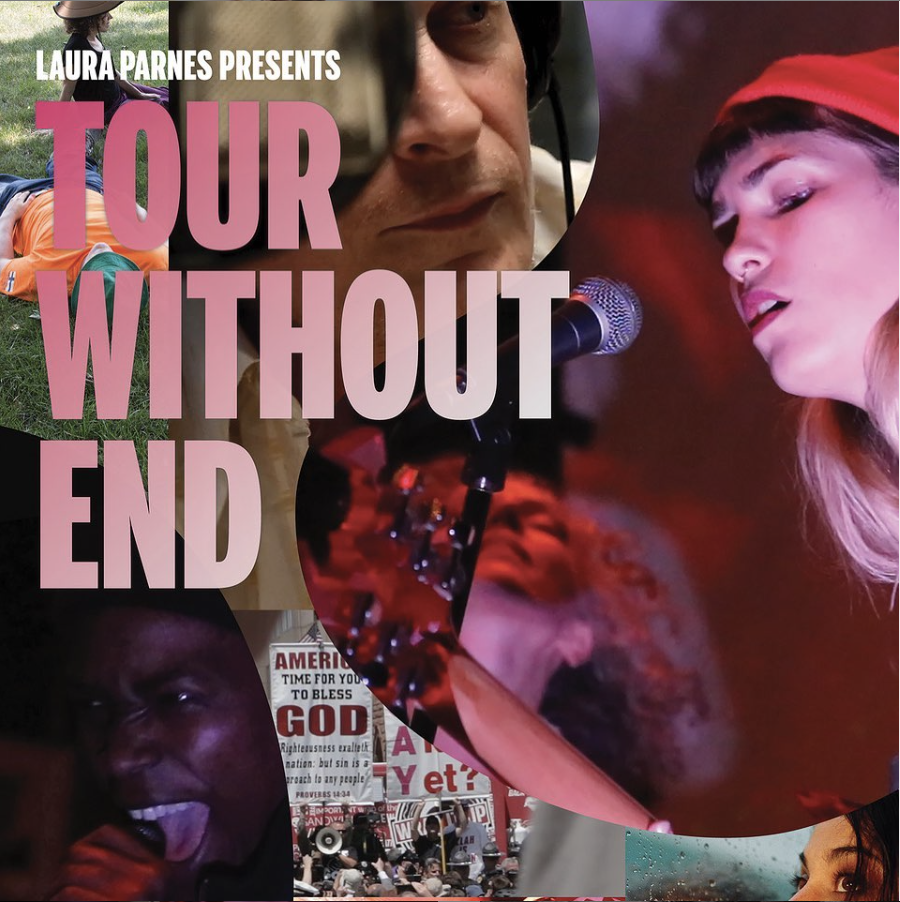 SCREENING OF TOUR WITHOUT END (92 min.) AND CONVERSATION WITH CHRIS KRAUS AND LAURA PARNES
ON FRIDAY, JANUARY 24, starting at 8, Suggested donation $10

GALLERY HOURS: Wednesday through Sunday, noon-6:00pm and by appointment.

LOS ANGELES, CA- Human Resources is pleased to present Tour Without End (2014-2019), a multi-platform installation that casts real-life musicians, artists and actors as bands on tour, and expands into a cross-generational, Trump–era commentary on contemporary culture and politics. It features members of Gang Gang Dance, LeTigre, The Julie Ruin, MEN, Eartheater, MGMT, Light Asylum, and more.

Shot in real environments and situations, the core group of players improvised based on semi-scripted scenes. Because many of these performers are legends themselves in the New York City downtown scene, they are archetypes playing archetypes.  The work revels in the sometimes hilarious — but always complex — band dynamics that the characters endure while touring, collaborating, and aging in a youth-driven music industry. As the players move in and out of character, blending fiction and real life, the film moves in and out of non-linear narrative and historical document.  Shot from 2014–2018 at over 15 DIY music spaces in and around New York City — many of which have since shuttered their doors — the film acts as an urgent time capsule for the rapidly gentrifying city.

The installation version highlights the extensive and growing archive of live performance in NYC shot during the four-year production schedule and the raw footage from the improvised scenes. These include more than thirty musicians and ten underground music venues. The archive expands as the project is shown. Portraits of performers taken By Justine Kurland are central to the installation.  The feature film (92 min) will screen everyday at 12, 1:32, 3:04, 4:36. The installation is travelling and was just exhibited at Burchfield Penney in Buffalo, NY.

Laura Parnes’ critically acclaimed films and installations address counter-cultural and youth-culture references where the music is integral to the work. Her work has been screened and exhibited widely in the US and internationally, including at the Whitney Museum of American Art, NY; MoMA PS1, NY; Miami Museum of Contemporary Art, FL; Brooklyn Museum; Deste Foundation for Contemporary Art, Athens; The International Film Festival Rotterdam, Rotterdam, Netherlands; and Museo Nacional Centro De Arte Reina Sofia, Madrid; and NY and on PBS and Spanish Television. Recently she had solo exhibitions at LA><, LA, Participant Inc., Fitzroy Gallery; and solo screenings at the Museum of Modern Art, and The Kitchen, New York City. Parnes is a 2013 John Simon Guggenheim Memorial Fellow, a 2014 NYFA recipient, and a 2016 Creative Capital Awardee. Video Data Bank published a box set of her work, and Participant Press published a book of her scripts titled ‘Blood and Guts in Hollywood: Two Screenplays’ by Laura Parnes with an introduction by Chris Kraus. She has also directed music videos for The Julie Ruin and Le Tigre.