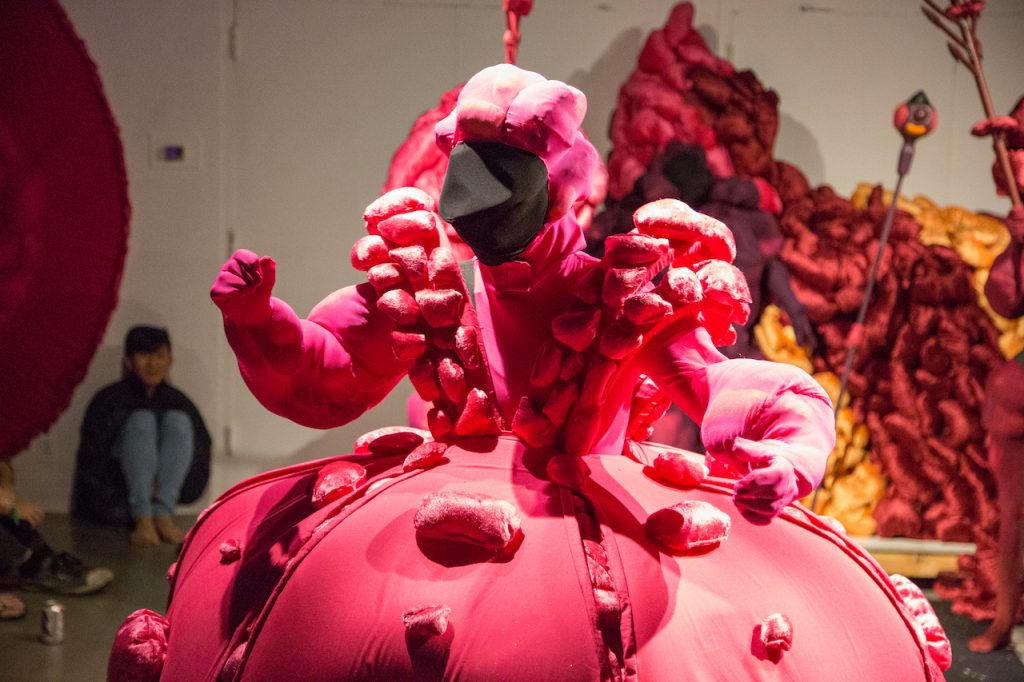 The lumpen world embodies the cannibalistic nature of the global economic and social structure. Colorful, velvet lumps comprise everything in the installation, amassed from the physical exploitation of the lumpen monsters.

A game of musical chairs serves as a model of the zero-sum system of capital. The players have to fight their competitors to gain an advantage as they try to get a seat. When one monster gets a chair, another is left to be dismembered. The phantasmagorical figures become violent embodiments of the forced competition as they torture and maim each other for power. The grey ghost monster “fractures all traditional conceptions of reality,” returning from death to emerge as an “alternative both to linear history and to postmodernism’s permanent revival.”1 It haunts the ball monster, insisting on futures beyond postmodernism’s terminal timeline.

The immersive combination of the installation, costumes, performance and operatic soundtrack reflects the wagnerian spectacle of opera–it is extravagant, gestural, ceremonial and performative. Employing the spectacle, we use over-the-top violence to “remind us that capitalism is already violent, that under capitalism violence is ambient and systematic, and that capitalism will only yield through greater and different violence.”2 The violent caricatures reveal the absurdity of oppressive social norms. Resisting binary and hierarchical classifications, the monsters explore these cruel behaviors in a space of indeterminacy–allowing for rethinking of power structures.