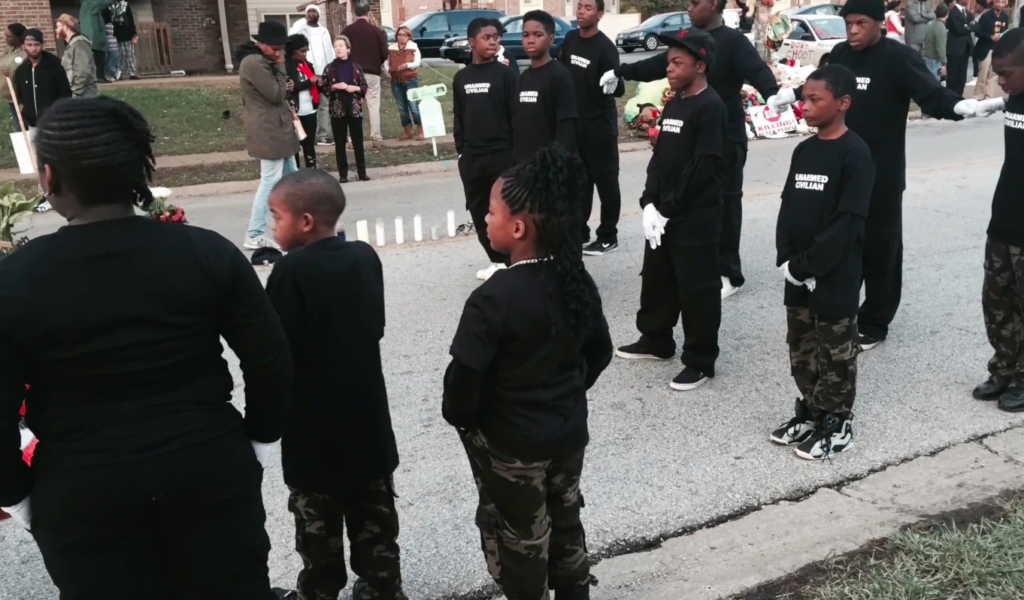 HRLA presents 2 videos by Time Space Money artist-in-residence Seren Sensei at Actual Size, which can been seen from the sidewalk, any time of day or night: The [Black] Americans EXTRAS: Detroit and Five Years Since Ferguson

From the artist: ‘I’m Seren Sensei, and I am a filmmaker, writer, cultural critic and artist. My work is dedicated to archiving and exploring the cultural narratives of Black Americans – Descendants of American Chattel Slavery (BA-DACS); my cultural criticism has been printed in such publications as Riot Material and NYLON, and referenced in Jacobin Mag, Vulture, Complex, Newsweek, AJ+, People, Netflix, Vice, and more. I was recently named a 2020 Indie Memphis Black Filmmaker Resident for my screenplay, ‘KITT.’ As an anti-capitalist and anarchist, I am also constantly seeking out ways to dismantle the hegemonies of systems of racism, sexism, classism, homophobia, able-bodiedness, and the like. Specializing in race, culture, and sociopolitical theory, I also facilitate an active community of over 43,000 subscribers and 7 million views on my YouTube channel (https://www.youtube.com/c/senseiaishitemasu), where I have released two seasons of the documentary web series ‘The [Black] Americans.’

The [Black] Americans EXTRAS: Detroit features a conversation on Black American Detroit culture as well as an example of ‘ballrooming,’ which is a cultural dance. Five Years Since Ferguson is a short documentary on my return to Ferguson, MO, where Mike Brown was murdered and the BLM movement kicked off, five years after I was last there in 2014 for the protest. Both pieces will be on display at Actual Size.