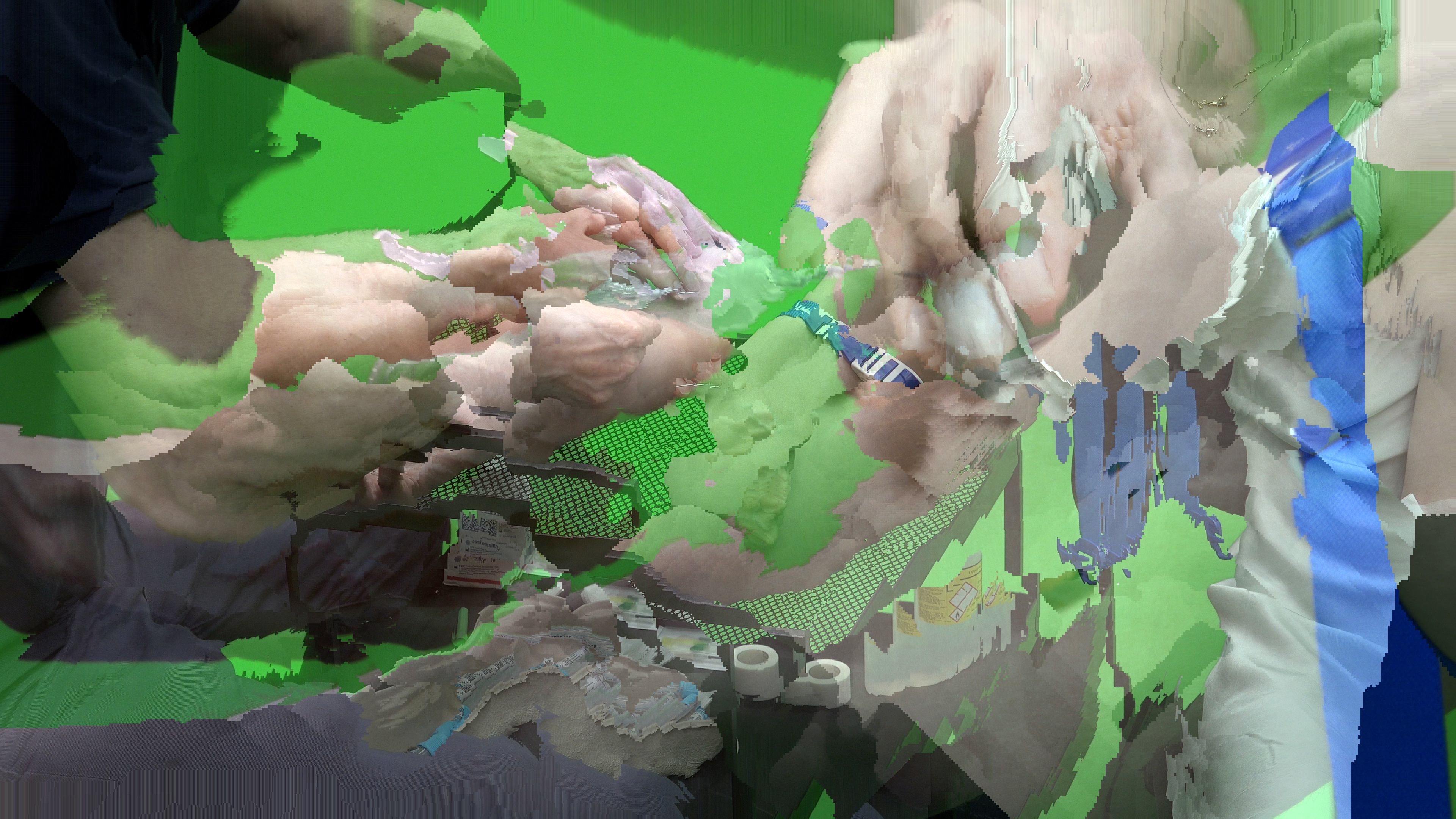 In light of a violent attack on the exhibition, LYLEX 1.0, by PHILTH HAUS, presented by the Feminist Center For Creative Work, the exhibition will not reopen at HRLA. A schedule for the

continuing phases of this project, at NAVEL and FCCW, will be updated and announced soon, as scheduling for the project is now being reworked in light of this incident.

Following the aforementioned attack, HRLA regrettably mismanaged our response. Up to this point, we have failed to listen to the suggestions of the artist and the FCCW with the necessary seriousness or care which we should have from the very beginning of our response. This is our second statement about the events that took place. It is meant to respond to the continued requests and suggestions of the artist and the FCCW to publish a statement with complete and current information.

This version replaces our previous statement, accounts for our activities in response to the occurrence, and atones for misstatements, the causes for which range from oversights and lack of information to a desire to minimize our culpability with regards to insufficient protection at the time of and immediately following the attack, as well as, in our response throughout the following weekend.

After some consideration, we are revising this statement, with a special emphasis on acknowledging the efforts that the exhibition organizers, and centrally, the artist, continue to expend in order to be heard and taken seriously regarding the level of threat the attack at HRLA on June 9th presented (described in more detail below).

We now recognize that our failure to respond appropriately over the last week, from our communications following the attack, through the authoring of the present statement, has perpetuated the undue and unfair labor regularly put on trans people to protect themselves from violence.

Over the past days, new information has come to light as part of our continuing efforts to form a complete picture of the incident on June 9th, and its reverberating effects. Here is a more complete account:

On Thursday night, June 9, an audience member, who was attending a music event hosted by HRLA, intentionally and violently attacked a section of the installation in the LYLEX 1.0 exhibit. A videographer, not affiliated with HR, captured the last moments of the attack on video, after the attacker, noteably a white cis man, pushed over the artwork and shouted disturbing language, condemning the exhibit — which is focused on trans lives and bodies, among other themes — as satanic and like death, remarks, that frightened and alarmed many members of the audience. Trusted eyewitnesses noted that they first noticed the man, becoming aggravated in the moments before the attack, arguing with a femme he seemed to be close to, later identified as the man’s partner. This incident took place right before the music program was set to begin, in the same space as the exhibit. The HRLA team facilitating the night’s event decided to continue the program, after acknowledging the harm done in a brief introduction. The performance was thus staged around the damage. There were conflicting eyewitness reports that we can’t confirm, but feel that it was our duty to report regardless: that the man circled the block 2 or 3 times after storming out of the space, and that he left in a car after.

Leaders at Human Resources, who reported the incident to FCCW the following day, offered very limited information about the incident and aggressor, specifically, painting the attack as more random and circumstantial than aggravated and targeted. Additionally, we contacted the artist directly which violated an appropriate chain of communication, as it would have been more suitable for this violent occurrence to be conveyed with care by the FCCW.

The video that was captured, along with multiple eyewitness accounts, confirms the intensity and specificity of the threat. We recognize our error and apologize for initially misrepresenting the nature of the attack— a misrepresentation that endangered the artist, as well as the queer staff members who returned to HRLA the following day without a full and accurate account of the incident.

It has also become evident that HR volunteers have not received proper crisis training, and were unable to provide an adequate and coordinated response to ensuring attendees’ safety on the night of the attack.

Our decisions in this incident’s immediate wake minimized the severity of the destruction, amplifying the vulnerability of everyone working on the exhibition. We are continuing to reflect on how these actions, as well as the tone of the earlier statement failed to live up to our aspiration to keep trans women safe.

This destructive act, and our response to it, reinforced especially trans and femme vulnerabilities within a transphobic, transmisogynist society. We placed the artist and FCCW in a position of needing to work to raise our awareness, and belabored them with multiple rounds of edits on our institutional statement, a statement which we ultimately could not agree upon. In the conversations surrounding the event’s aftermath and throughout this process of drafting our initial statement, conversations between HRLA and the artist and FCCW were marked by a defensiveness that we regret. Certain members of our team spoke over the artist, and made attempts to compare their own suffering as well as that of HRLA as an institution, to the harm experienced by the artist and her work. On Sunday, we proceeded to publish this statement

without many changes that were important to them. Despite these regrettable actions, the artist and the team at the Feminist Center for Creative Work have taken the brunt of working through the damage, and have graciously agreed to collaborate with us up through a single edit of the current document.

We apologize to the artists and to the exhibition’s organizers for the harm this incident has caused.

We apologize to the community of the artist’s supporters, and the other institutional stakeholders who are unable to view the work in its initially iterated environment and timeline.

HRLA is committed to the safety of our space, this exhibition and all the people working in support of it. We are committed to uplifting this artist’s work, and the trans and queer community at HRLA. To this end, we are reviewing all aspects of our decision-making around this event. This is a moment for HRLA to recognize and address our own shortcomings in the handling of this crisis and to demonstrate in praxis, and not just words, what it means for HRLA to protect the trans community.

We are sorry that the mishandling of this incident has altered the pace, planning, and celebratory nature of this multi-venue project for the artists and FCCW, presenting the artist with additional loss, and increased burden of work. We recognize the need for continued work to repair the damage resulting from the violent and specific destruction of the artist’s work—a literal living organism and an embodiment of trans life.

On view at HRLA from June 4th-June 19st. Wednesday–Sunday, Noon to 6pm, and by appointment.

Los Angeles, CA – Feminist Center for Creative Work is pleased to present LYLEX 1.0,  a new, three-venue exhibition by PHILTH HAUS, a collective of 6 member-clients currently represented by ANDRA, curated by FCCW Programming Director Mandy Harris Williams. LYLEX 1.0 will open at Human Resources in Chinatown on June 4, 2022 before flushing and rhizomorphing to Feminist Center for Creative Work (Glendale) and Navel (Downtown LA). The installation will be accompanied by programming at each location.

In advance of, and throughout the exhibition LYLEX will develop oyster mushrooms in sculptural encasements, fed with the blood of a person undergoing hormonal and dietary modulation therapies. Expounding on themes of exploitative globalization, wealth inequality, and new age therapies and their inherent privilege of certain bodily forms and functions over others, the modified mushrooms will be transformed into pills and powders, with branded jewelry and apparel available for sale throughout the exhibition and online.

“Like the mushroom itself, the development of this show has been unpredictable, unwitting, uncompromising. Bravely adapting throughout an unwieldy period in our history, throughout unforeseen environments, organizational changes and timelines, within new collaborations, constraints, opportunities and designs, Philth Haus has demonstrated a mycelial commitment to growing the ideas and objects and processes of the LYLEX show. It is our honor and a victory, at that, to share these fruiting labors with our members, community, audience, and the Los Angeles community at large. ”

By introducing blood into an edible “lifestyle” product, LYLEX 1.0 hopes to confront how globalization has allowed for the mass-distribution of exploitation at a distance by certain privileged bodies onto economically disenfranchised ones. These seemingly one-way systemic hierarchies of financial and social domination are repurposed by LYLEX. Indeed, these systems of wealthy lifestyle health-food consumption are made into a means through which the under-privileged can contaminate, influence, and modify the socioeconomically enfranchised.

LYLEX introduces the blood of an individual undergoing hormonal and dietary modulation therapies via an intermediary bio-indicator species, the Oyster Mushroom, which retains much of the blood nutrients and endocrine compounds upon which the funguses are grown. This provides a means through which chemicals originally found in the anonymous body of a transgender person might enter into the bodies of the economically privileged with a penchant for new age therapies which provide enhanced appearance, psyche, and longevity.

These modified mushrooms are introduced via mobile, for use at-home, production cases, pills and powders. Jewelry and apparel featuring LYLEX branding, and a three-channel video advertisement accompany these items. Further glimpses into the mysterious world of LYLEX, product and/or persona, lie within an accompanying text published by FCCW, a haunting (fictional) documentation of the experiences of one such user and her lover/friend as they embark on a relationship with themselves and the unwieldy entity that is LYLEX.

Specifically, “I am an economy. I am a family.”

– LYLEX of the PHILTH HAUS collective

PHILTH HAUS is a collective of 6 member-clients currently represented by ANDRA. Each member-entity instructs ANDRA on how to produce art installations, performance, and sonics which ephemerally embody one or–less frequently–multiple collective members. This process gives sanctity to post-anthropomorphic materials, objects, and systems as capable of holding the intelligences of each entity. The collective’s methodology is a material activation of the immaterial and a process of transubstantiation. Recent materials have included hormonally active waste water, lithium carbonate, machine learning, blood, and music. Through this collective, each member hopes to transcend to a realm in which the planet and body are made one via globalized economies, identity semiotics, and biological contamination.

Wednesday–Sunday, Noon to 6pm, and by appointment

Saturday–Monday, Noon to 6pm, and by appointment

Thursday–Monday, Noon to 6pm, and by appointment

Exhibition Opening with Performance (I am a family. I am an economy.)

Opening party, presented in partnership with Navel, featuring DJ sets by St. Mozelle, IdealBlackFemale, with more to come, and with strip performances by Jolene, a trans-inclusive dance collective.

Reading of LOGS by LYLEX via Andra. A session for discussion and questions will follow after the reading.

LYLEX 1.0 is supported in part by the Pasadena Arts Alliance among other funders and FCCW members. This project has been made possible with production support from consultant Joseph Stewart, Amber Ibarreche, and Tiny Splendor.