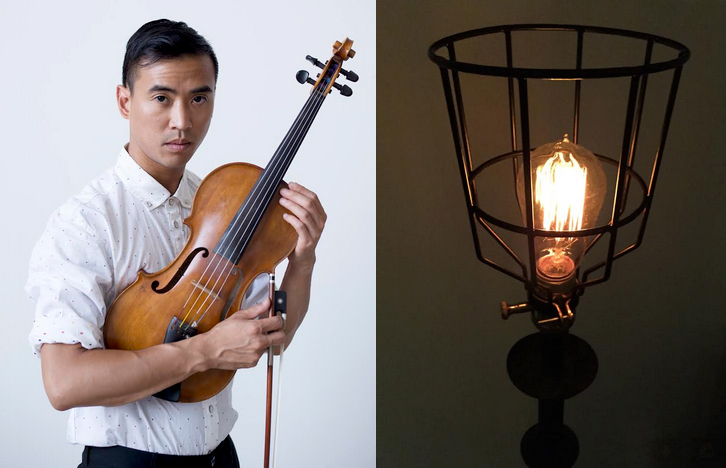 Mark Golamco founded and hosted a monthly performance cabaret called Ghostlight at the infamous (and now shuttered) Cafe Dancer bar in New York City. Ghostlight is an eclectic night of performance featuring exceptional artists and DJs. Each night is grounded by an intimate solo performance by Golamco self-accompanied on the viola.

Ghostlight has now become a nomadic series, recently staged aboard the steamboat SS Lilac on the Hudson River and at Judson Memorial Church in NYC. Mark is thrilled to bring this performance series to HRLA. He will be joined by musical guests Michael Gerald Bauer, Oscar Santos and DJ Earthen Oxytocin. The performance will also include some installation magic by Felisa Funes from Of The Flowers and Travis D of Project Rage Queen. Special guest appearance on Saturday night by Gorgeous Vermillion and Beast Nest featuring Alexander Brown and John Brumley.

These artists will be charging the space with energy before and during the performances through art making, installation and elemental ritual. The public is invited to see the remnants of these occurrences as well as impromptu performances during open gallery hours.

Saturday, December 19th
Doors 8PM Show starts at 9PM
Performance -Evening Two: Night at Cafe Dancer
Since it’s establishment in 2013, Mark Golamco has been performing monthly as a singer, self-accompanied on the viola at Cafe Dancer. This is an artist’s space in the Lower East Side of Manhattan. Mark brings Cafe Dancer to HRLA by presenting elements of the space (a projection of the street window, a portion of the bar) as well as the music he performs there live.

Mark Golamco is an artist that lives in New York. He is a classically trained violist from San Francisco who grew up playing in Orchestras, but went solo as he began to study and practice visual art at UCLA. Later, he received an MFA in Painting from RISD. His work combines music performance and art installations that are reflective of his personal history. He has performed at The Whitney Museum of American Art, NY, The Metropolitan Museum of Art, NY, and The Redcat Theater, LA.