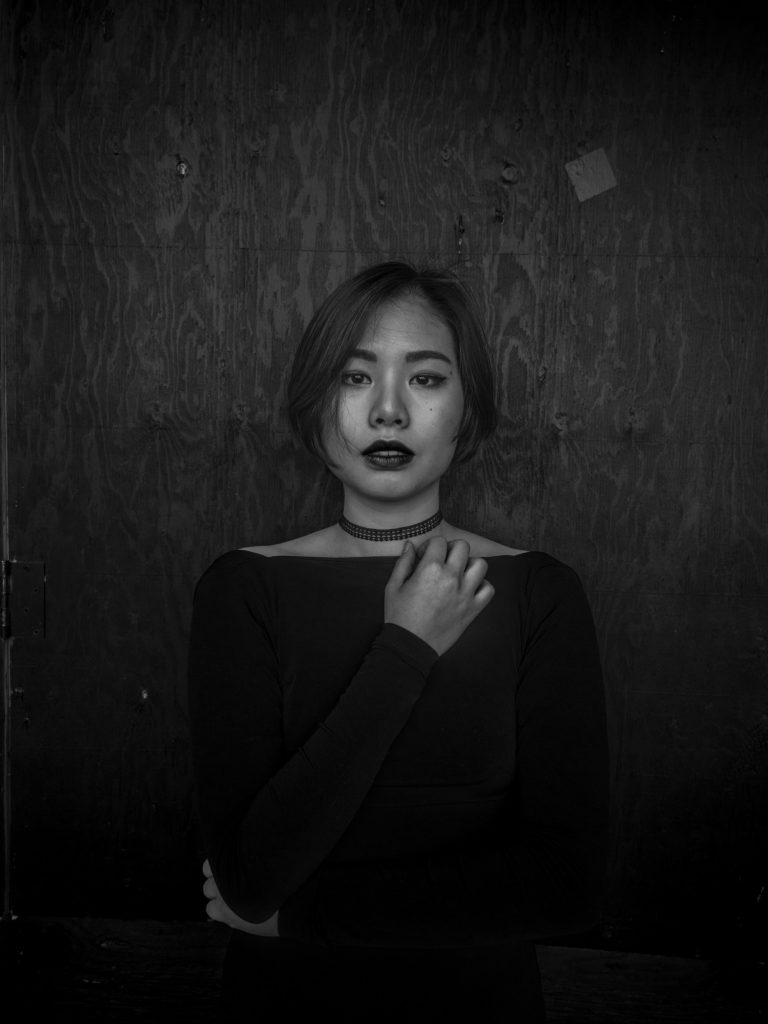 JIJI tells two stories: One, spinning Gulli Bjornsson’s story of capsizing and falling into the ocean, being tossed around in the waves as night approaches, and waves of sound consume the listener. Bjornsson’s dimmar oldur risa is inspired by an ancient Icelandic poem by Jónas Hallgrímsson. And secondly, her own piece Kintsukuo, after the Japanese art of repairing broken pottery by mending the areas of breakage with lacquer dusted or mixed with powdered gold, silver, or platinum. She wrote the piece in 2016 a heartbreaking year for her. “I had massive anxiety that I was going to be kicked out of the country because of some orange guy. It also felt like the world was going to end. I lost a few friendships- things were changing and I felt broken. I wrote this piece in order to pick myself up—to heal and repair.”

Applauded by the Calgary Herald as “…talented, sensitive…brilliant,” JIJI is an adventurous artist on both acoustic and electric guitar, playing a wide range of music from traditional and contemporary classical to free improvisation. A passionate advocate of new music, JIJI has premiered works by composers such as Paul Lansky, Joao Luiz, Molly Joyce, Krists Auznieks, Gulli Björnsson and Evan Chapman. In addition; she is the dedicatee of three new guitar concertos by Natalie Diettrich, Hillary Purrington and Kristz Ausnieks. She is sponsored by D’Addario Strings and Guitarlift. She currently is the head of the guitar department at Arizona State University. In her free time, she likes to cook and make weird sounds on ableton.

What is it about the end of the year? It’s dark already, our clocks have jumped. And even in LA nights seem to overtake the days. Pagan and sacred holidays abound: rituals collecting themselves around the darkness. We’re hungry for something new, for something wrapped and warm, yet we search for a newness unbounded by the trappings of the past. In December 2019 and January 2020 Wild Up embarks on a new venture, a series set against the darkest days of the year. We make mindful, joyful and maybe melancholic music, endeavoring to drone sounds of the earth. The sounds of community being drawn together in contemplation.

darkness sounding is made possible through generous support from Ruth Gilliland and Arthur Rieman, and Bill Anawalt.

Called “a raucous, grungy, irresistibly exuberant … fun-loving, exceptionally virtuosic family” by Zachary Woolfe of the New York Times, Wild Up has been lauded as one of classical music’s most exciting groups by virtually every significant institution and critic within earshot. Artistic Director Christopher Rountree started the group in 2010 with a vision of a group of young musicians that rejected outdated traditions and threw classical repertoire into the context of pop culture, new music, and performance art.

In 2019 – 2020, the group celebrates 10 years of bringing people together around the belief that no music is off limits, that classical music concerts can defy convention and address the need for heart-wrenching, mind-bending experiences.

Over the past decade the group: accompanied Björk at Goldenvoice’s FYF Fest; premiered David Lang and Mark Dion’s “anatomy theater” at LA Opera; played the scores to “Under the Skin” by Mica Levi and “Punch Drunk Love” by Jon Brion live with the films at L.A.’s Regent Theater and Ace Hotel; premiered a new opera by Julia Holter at Brooklyn’s National Sawdust; premiered a new work of avant-pop icon Scott Walker and celestial loop-maker Juliana Barwick at Walt Disney Concert Hall; played a noise concert as a fanfare for the groundbreaking of Frank Gehry’s new building on Grand Avenue and First Street in downtown L.A.; was nominated for a Grammy for their 2019 Chris Cerrone portrait “The Pieces That Fall to Earth; and held performance and educational residencies at the Los Angeles Philharmonic, the Colburn School, Los Angeles Chamber Orchestra, National Sawdust, University of North Carolina, and the Hammer Museum, among others.