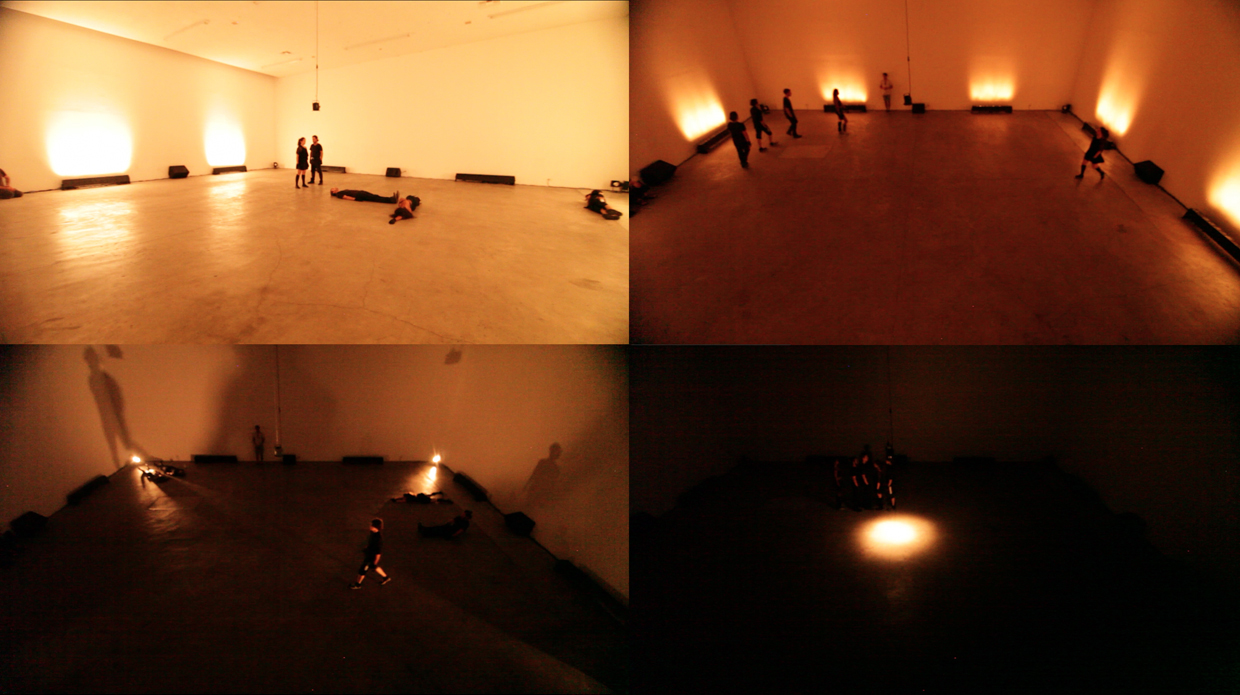 Memory can play as much of a role in the experience of a moment as the immediate elements that form the moment. The filmic “cut” is an increasingly present element in our lives, causing constant intervallic shifts in perceived environment and mental states. Interval/Habitat considers the idea of the interval as a quality of environment, sound, and time. By employing this idea of “cut” and transition from moment to moment, the exhibition hopes to explore how dramatic perceptual events can linger in memory, creating separate psychological transitions that affect our interaction with physical space as well as with each other.
Byron Westbrook’s Interval/Habitat installation at Human Resources approaches the space as a dramatic stage. Inviting several guest performers and the audience to activate this stage, it plays looping sequences of light and sound to create “scenes” and filmic “cuts” to impose a time-based narrative form over all activity within the space. The piece approaches light and sound as physical, structural material to facilitate a changing awareness of self, body, space, and presence of others, defining social boundaries by limiting what visitors can see or hear, and dynamically shifting their focus between navigating internal psychological space and external physical space.
Interval/Habitat hosted an accompanying series of performances, each of which offered focused examples of what may emerge from the imposition of Interval/Habitat’s dramatic structure on physical interaction, perception and communication.
Performance included:
August 15, 7pm Jules Gimbrone and ensemble /Alison D’Amato, Jos McKain and Jillian Stein / Jeff Witscher
August 18, 3 – 7pm Jesse Peterson and Cassia Streb / Sam Fisher and Gabriel Marantz / Maya Gingery and ensemble
August 22, 7pm Casey Anderson and ensemble / Ted Byrnes, Ulrich Krieger and Wyatt Keusch/ Erin Schneider with Rose Mackey, Eirik Schmertmann, Elizabeth Sonenberg, and Jos McKain
Byron Westbrook is an artist working with the dynamic quality of physical space through site-specific installations and unique listening formats to activate architecture and community. He has presented work at Clocktower Gallery, LMAK Projects, ISSUE Project Room, Diapason Gallery, ExitArt (NYC), ICA London, The LAB (San Francisco), VIVO MediaArtCenter (Vancouver), O’ (Milan), among many others. He has been an artist in residence at Clocktower Gallery, Wassaic Project, Diapason Gallery, Hotel Pupik, and Institute of Intermedia. He has also worked closely with composer/filmmaker Phill Niblock’s Experimental Intermedia Foundation since 2005. He holds an MFA from the Milton Avery Graduate School of Arts at Bard College and lives and works in Brooklyn, NY.