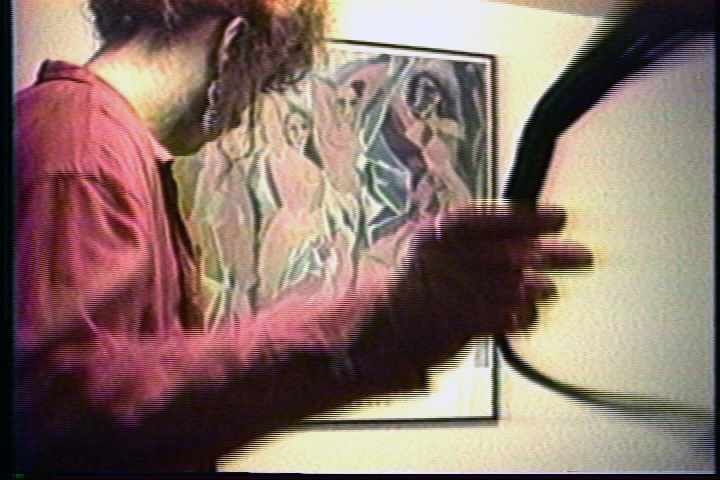 “Sex is a gift we are given, and we should all just have fun with that.”
-Margie Schnibbe (as Vena Virago) in I Had Sex with a Gigolo on Reality TV (2015)

Indecent Exposure is a retrospective of Margie Schnibbe’s sexually explicit videos and includes over twenty years of work. Paying homage to Cinemaland, the building’s previous tenants, the main gallery is utilized as a casual movie theater, with a ninety-nine minute video program projected as a continuous loop. The seating arrangements are comfortable and migratory; viewers are encouraged to sit close together or far apart, to mingle, to come and go as they please. The upstairs galleries are spaces for invited artists to create intimate performances that encourage participation. The lobby operates as a bar and gift shop. The exhibition is organized by John E. Kush, and will be open nightly.

Schnibbe’s videos chronicle her life, often portraying her friends, jobs, partners, pets, and sometimes herself. The program begins with Mistress Samantha Diet Doctor (1994), filmed while Schnibbe worked as a dominatrix in New York City. The video documents one of the artist’s co-workers in a scene with a client/sub and a MOMA poster with the image of Picasso’s Les Demoiselles d’Avignon. Schnibbe’s other early works include Art Farm (1995), the staging of a go-go dancer in Kostabi World Soho with a soundtrack by Heidegger, Hans Object of Desire (1995), a document of her dachshund’s passion for munching on her colleagues’ sex toys, and First Date (1997), a psychedelic home-porn mash-up of the artist and former fuck buddies.

In the mid-aughts Schnibbe worked for Vivid Entertainment and Hustler Video as a production designer and director of commercial pornography under the moniker Vena Virago. The program includes several trailers from Virago’s feature-length movies: Silverlake Scenesters (2006), Eastside Story (2007), Honey Bunny (2008), and Nietzsche Bangers (2005). In 2008, for the first time in over ten years, Schnibbe once again put her naked self in front of the camera in Case 1112: Forty is the New 14, a somewhat fictionalized self-portrait of the artist as a sentimental masturbator.

Schnibbe received a MFA from California Institute of the Arts in 1998, and a BFA from Kansas City Art Institute in 1991. Schnibbe was born in Yonkers, New York and studied at Hunter College of the City University of New York in the late eighties. Schnibbe lives and works in Los Angeles and hosts a monthly program on KCHUNG Radio.