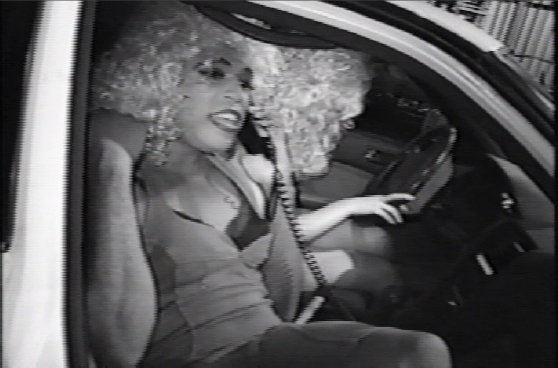 LOS ANGELES, CA: DIRTY LOOKS, a New York-based platform for queer experimental film and video, will screen FEMALE TROUBLE at Human Resources gallery during a month-long residency by arts collective, My Barbarian. FEMALE TROUBLE is a selection of works that explore & explode normative roles of femininity and gender. With pieces that span five decades, these artists queer female subject space via drag tactics, narrative juxtaposition and overt performativity, with approaches ranging from masquerade to mythic, performance document to exposé video zine.

With Mario Montez Screen Test, Conrad Ventur resubmits Jack Smith/Warhol Superstar Mario Montez to Warhol’s screen test format some 45 years later. Patti Podesta writes of her video Stepping, “I wanted to make something about risk, about repetition and a sort of lulling into nonsense of a very dangerous situation.” Steven Arnold won the Best New Director award at the Cannes Film Festival for his film Messages, Messages continuing in the tradition of Cocteau and Anger, following its singular protagonist through a psychosexual labyrinth of libidinal delights and genderfuck costumery.

Matthias Müller’s Home Stories culls from classic Hollywood Woman’s Films like Written on the Wind, Madame X and The Birds, re-editing footage shot off the t.v. to examine the finite gestures and the repetitive interplays of genre (and gendered) cinema.

Narcissister’s Every Woman is a performance document in which the artist dresses herself in the slinky feminine attire, which she unspools from every bodily orifice imaginable, all to Chaka Khan’s ubiquitous anthem, of course. A chapter from Vaginal Davis and Rick Castro’s Fertile La Toyah Jackson “Aksionist Video Magazine,” Barbi Twins documents an incongruous sister duo’s Los Angeles exploits and lively recollections in true reportage form.

Dirty Looks is a roaming series held on the last Wednesday of the month. Curated by Bradford Nordeen, Dirty Looks is a screening series designed to trace contemporary queer aesthetics through historical works, presenting quintessential GLBT film and video alongside up-and-coming artists and filmmakers. Filling a gap in the regular programming of Queer experimental work in the New York film community, Dirty Looks receives roughly 65-100 visitors per month. A salon of influences, Dirty Looks is an open platform for inquiry, discussion and debate.

“Deliver us from Daddy! Dirty Looks sets its sights on artist film and video that pierces dominant narratives, wanders with deviant eyes or captures the counter in salacious glares.”

About the Human Resources:

Human Resources is a team of creative individuals which seeks to broaden engagement with contemporary and conceptual art, with an emphasis on performative and underexposed modes of expression. Human Resources is entirely volunteer run and seeks to foster widespread public appreciation of the performative arts by encouraging maximum community access. Human Resources also serves as a point of convergence for diverse and disparate art communities to engage in conversation and idea-sharing promoting the sustainability of non-traditional art form

My Barbarian is a Los Angeles based collaborative group consisting of Malik Gaines, Jade Gordon and Alexandro Segade. The trio makes site-responsive performances and video installations that use theatrical play to draw allegorical narratives out of historical dilemmas, mythical conflicts, and current political crises. In February, the group will install elements of their “Broke Peoples’ Baroque People’s Theater” project in the gallery, including sculptural objects and videos that meditate on poverty and excess. The installation will additionally serve as a site for performances, screenings, and events during the exhibition’s run.

STEVEN ARNOLD was an artist, photographer, filmmaker, muse and model of Salvador Dalí’s, and the center of a Los Angeles circle reminiscent of Warhol’s Factory. His films provide a bridge between the early cross-gender experiments of Claude Cahun and Pierre Molinier and what Gene Youngblood termed the “polymorphous subterranean world of unisexual transvestism,” which he saw as a hallmark of the emerging “synesthetic cinema” of the 1960s. The screening also pays homage to an innovative—yet often overlooked—poet of the Beat Generation, Ruth Weiss, who stars in all the films.

RICK CASTRO is an independent filmmaker & photographer living in Los Angeles. Rick’s work explores the world of fetish and fringes of sex culture. His work has been published in artist editions, exhibitions and institutions worldwide. He is the director of numerous films and videotapes, including Hustler White (co-directed with Bruce La Bruce), Hellion Heatwave, Fertile La Toyah Jackson, and Three Faces of Women.

VAGINAL DAVIS was born and raised in Los Angeles, but now lives in Berlin. She is an accomplished experimental filmmaker, visual artist and writer, who Hilton Als of The New Yorker has called “the poet laureate of Santa Monica Blvd.” She has curated programs for many film festivals including Berlin and Sundance. She teaches performance at Lund University’s Malmö Art Academy (Sweden). She is also the subject of academic elucidation by Jose Muñoz in Disidentifications: Queers of Color and the Performance of Politics and Jennifer Doyle in Sex Objects: Art and the Dialectics of Desire.

ZACKARY DRUCKER is a limp-wristed, switch queen/Los Angeles-based artist. Infusing elements of installation, performance, text, photography, and video, Drucker’s work explores under-recognized aspects of queer history while simultaneously inscribing her own experience and position within it. Drucker reactivates Bruce Rodgers’ The Queens’ Vernacular , documents relationships and secret legacies, and challenges conventions of entertainment and drag performance, as well as existing art-historical representations of queer people. Oscillating between documentary, mythology, and personal narrative, the work is an overall novel exploration of gender as it is constructed, deconstructed, and experienced.

MATTIAS MÜLLER is a German experimental filmmaker and curator, often working in the field of found footage. From 1994 to 1997 he worked as Guest Professor at the Johann Wolfgang Goethe University Frankfurt am Main (Germany), and from 1998 to 1999 at the Dortmund Fachhochschule. Since 2003 he is Professor for Experimental Film at the Academy of Media Arts (KHM), Cologne, Germany. For his films he has received numerous awards from many international festivals, including the American Federation of Arts Experimental Film Award in 1988, the Golden Gate Award at the San Francisco International Film Festival in 1996, the main award at the Internationale Kurzfilmtage Oberhausen in 1999, the Ken Burns “Best of the Festival“ Award at the Ann Arbor Film Festival in 2003, and the German Short Film Prize for Animation in 2006.

NARCISSISTER is a Brooklyn-based artist and performer. Her formative training took place at the Alvin Ailey American Dance Center. In addition to performance work, Narcissister does collage, sculpture, video art, and photography. Her studio residencies include The Whitney Museum IS Program, The Woodstock Center for Photography AIR Program, and the Art in General Eastern European Residency Program. Narcissister has also worked extensively as a commercial artist, designing window displays and working as a stylist and art director.

PATTI PODESTA’s career is a continuing investigation of the intersection of art and film. Together with artist Bruce Yonemoto, Ms. Podesta co-founded the video program at Los Angeles Contemporary Exhibitions (LACE). In the early 90s, she began designing feature films and this has become the focus of her career, the synthesis of her interest in the sculptural and the temporal, in architecture and in color. She has designed for the original and acclaimed film “Memento,” the HBO film “Recount,” “Smart People,” and “Bobby.” Ms. Podesta’s work in film and video has been screened throughout the United States and Europe including the Museum of Modern Art, the Rotterdam Film Festival, the American Film Institute National Video Festival, the Pacific Film Archives and recently at LACMA and the UCLA Hammer Museum. Her work was included in the Getty Museum’s historic “California Video” exhibition and catalogue. Born in Los Angeles, Podesta received a B.A. from Pitzer College and an M.F.A. from Claremont Graduate School.