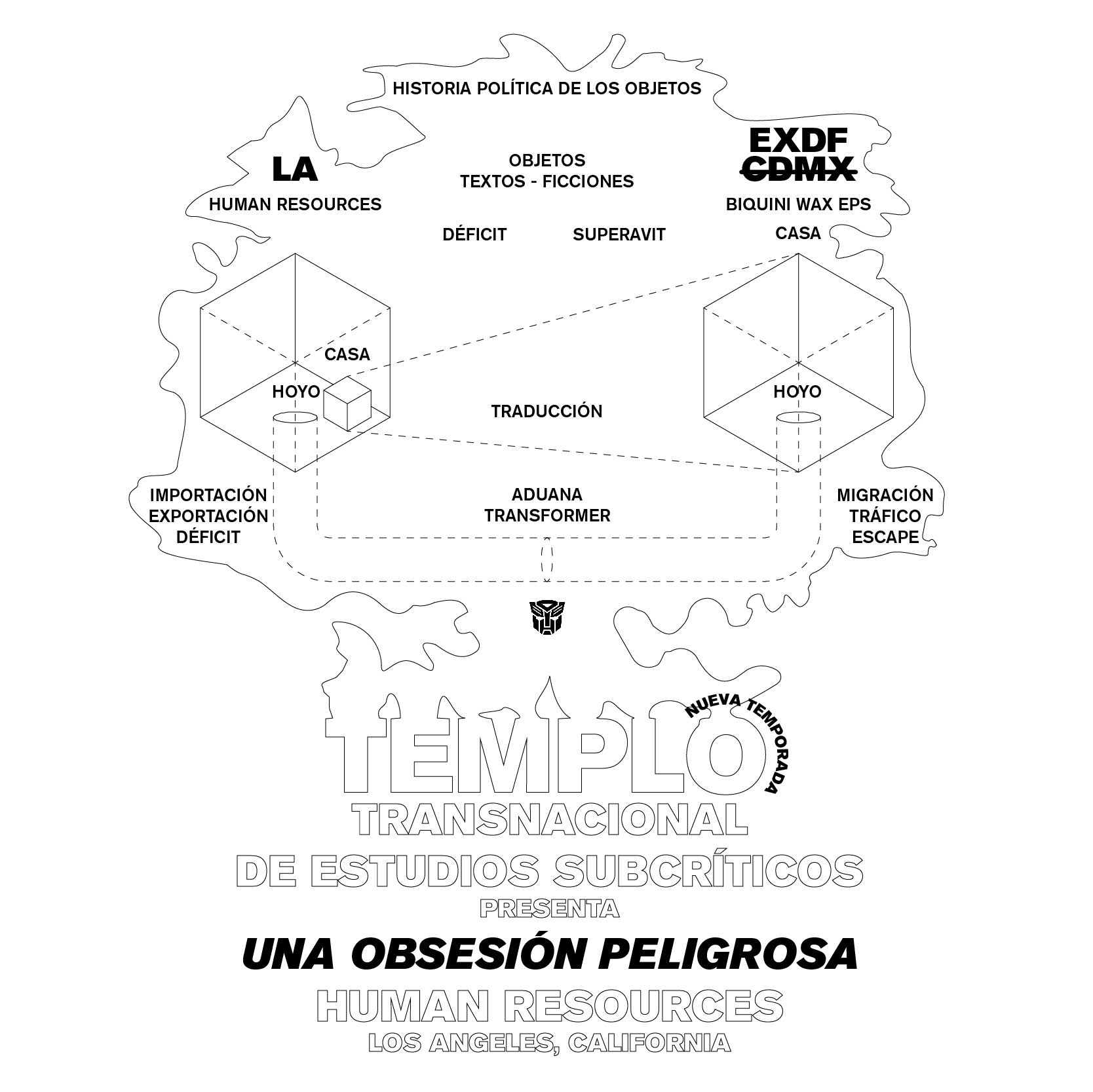 A Dangerous Obsession (A thriller of plastic moments)

Exhibition is open on Saturdays and Sundays, 12-8pm, and by appointment.

During three weekends in May, writers and artists based here (USA) or based there (MX) will explore the marshy lands of NAFTAlgia in search of the mythical trade deficit.

A Dangerous Obsession alludes to the temptation of US presidents (from George W. Bush to Donald Trump) to justify trade wars in the name of a “trade deficit.”

We believe that Trump uses the trade deficit, and specifically that of the automobile industry, as a rhetorical and ideological strategy of nostalgia, because it uses one of the pillars of the modern American nation: the automobile industry, and the myths of companies such as Ford, General Motors, etc. The slogan of his campaign, “Make America Great Again”, responds to the popular demand and the desire to believe that there was a better form of capitalism. This populist rhetoric assumes that the way to sublimate the United State’s current economic impotence, brought about by the failure or end of this ‘pure’ capitalism –an earthly paradise– is by pointing out the culprits of its disappearance: Mexico, China, Russia, the Middle East, etc.

For A Dangerous Obsession we have compiled a series of economic-political histories of commodities —a series of critiques on commodity fetishism— that use as their starting point the trade deficit and the renegotiation of NAFTA, written by storytellers from the US and Mexico.

We will summon a certain “structure of feeling”, which we have called Naftalgia (a combination of nostalgia and NAFTA). Naftalgia is a type of specific sensibility under neoliberalism, conditioned and motivated by the illusion of a better Mexico / USA, which has been and continues to be culturally consumed as comprised of a general lacking; an ideological deficit of the promise of capitalist plenitude now absent, on hold, or disappeared forever.

This transnational impulse has a hole, a house and a temple. From the hole it comes out exports-imports from CDMX-LA and LA-CDMX, the house it is BWEPS house but shrinked by a shrink ray that we built after a succesful Kickstarter campaign and the temple it is a broadcasting live stream confessionary on YouTube about Naftalgia experiences and other contemporaries structures of feelings.

Members of Biquini Wax EPS will read two poems. The first, Sánafabich by Roman Lujan, will be broadcasted from the HRLA hole, followed by Anti-Humboldt: A Reading of the North American Free Trade Agreement by Hugo García Manríquez, broadcasted from the BWEPS hole in Mexico City.

Intervention in the little house by David Gilbert and John Burtole

Activities occur simultaneously in both spaces BWEPS and HRLA; and will be broadcast by livestream

We would present more interventions by artists at BWEPS shrunken house after our successful Kickstarter campaign to build a shrink ray. So far, we already are showing artworks by Jorge Satorre, Torie Zalben, Steven Perilloux, John Bartle and David Gilbert and this sunday you will find works by Yelena Zhelezov, Pedro Lasch, Andrew Roberts, Mariel Miranda and Mario V Romero.

A text to read/perform by Namourah – broadcasting from HRLA hole, Los Angeles.

Body In River, Head Across Sky + Omi Toki Samantha Blake Goodman, founder of MAPS, will be presenting her work “Body in River, Head Across Sky”. The work will be performed by Christopher Bordenave of No)One. Art house and will be accompanied by a screening of “Omi Toki – Water is Worthy of Praise” a film by Nery Madrid.  The film is a collaborative work that honors life and female ancestry.

Blake Goodman’s collaboration offers an exploration of the body as a vehicle through which corporal heritage is preserved, particularly that of the Afrolatino diaspora. The artist’s collaboration brings the body in movement to the table as one of the many platforms for the narratives of deficiency that constitute the lines of obsessive economic nostalgia, or Naftalgia, this exhibit traces.

MAPS ( Movement Arts Performance Space) is a project founded by Samantha Blake Goodman dedicated to cultivating the contemporary and traditional arts of the Afro-Latinx and Caribbean diaspora in Los Angeles.

Group discussion about what was presented and moderated by BWEPS people.

Biquini Wax E.P.S is a self-managed temple of pagan studies devoted to plastic integration, the analectic image, aesthetology, the PDF, and other occurrences in Mexico City. Artists, writers, editors, historians, philosophers, curators and whatever beings are part of the sect. It is profane, pubic and all their rituals are free such as readings groups, exhibitions, seminars and other kinds of exorcisms. With a focus on the study and critical production of contemporary art, Biquini Wax E.P.S. is also distinguished by a frenetic program of activities always linked to the sect’s interests: humor, economy, Modern Mexican Art, painting, philosophy, literature, Marxism, Visual Studies, digital culture, criticism, and more. Biquini Wax E.P.S. was founded on Leon, Guanajuato in 2011 and since 2013 has been located in Mexico City. Indeed, we love John Burtle.

This project is supported by Gueshaus Residencies