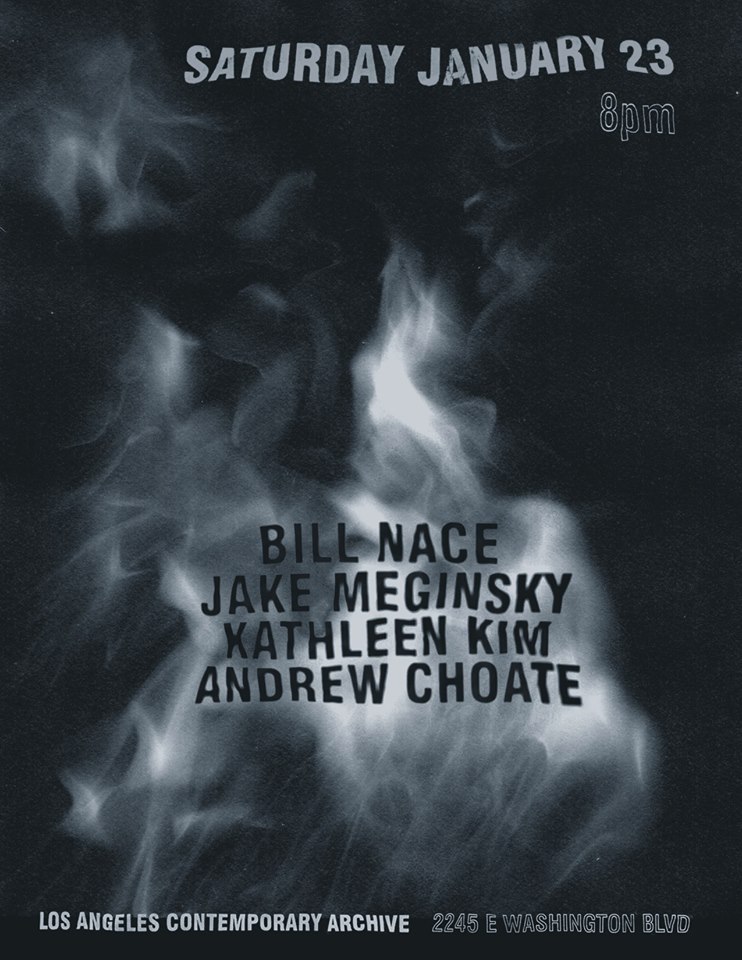 “the humble and unentitled”
pleasantly submit

doors at 8pm
sound at 9pm

Los Angeles is the terminus of a January 2016 coast-to-coast tour by Jake Meginsky and Bill Nace. Though this pair of New England experimentalists have been collaborators for a decade and a half, on this trek each plays a solo set.

Guitarist Bill Nace brings a shredder instinct and deft touch to any gig or sesh, as he’s done with figures as diverse as Chris Corsano, Aaron Dilloway, and Joe McPhee. This show will be Bill’s first solo set in L.A. this decade and also his first since embarking on what has become his best known project: the heavy-art guitar duo Body/Head with Kim Gordon.

Jake Meginsky is a rarefied percussionist who can embrace, eschew, or simply chew on rhythm. Jake’s tour rig may now be a shuffle of bits and bytes, but his instincts as a hitter-of-things are intact. His digital concrète has opened the possibility of a spectralized batterie: recombining elements into a new flow, or — just as easily — reducing them to crackle.

Kathleen Kim is a Los Angeles-based violinist and member of avant-chamber quartet L.A. Fog. Though she can extend through technique and technology, the core of her sound imagination is an idiomatic play of the violin itself — fluidly free sailing as motifs rise and fall.

Andrew Choate is an L.A. poet with humor and howl. His readings are LIVE and no doubt informed by the musics his Unwrinkled Ear chases: the new, the out, and the free. Those partial to entendre might say he is a “post” poet as he is currently blazing a new medium for the form via his instagram feed, Saint Bollard.

For the sour serious and beer curious, a private reserve of Oude Gueuze from Belgium’s Brouwerij DeTroch will be poured along with other refreshments.