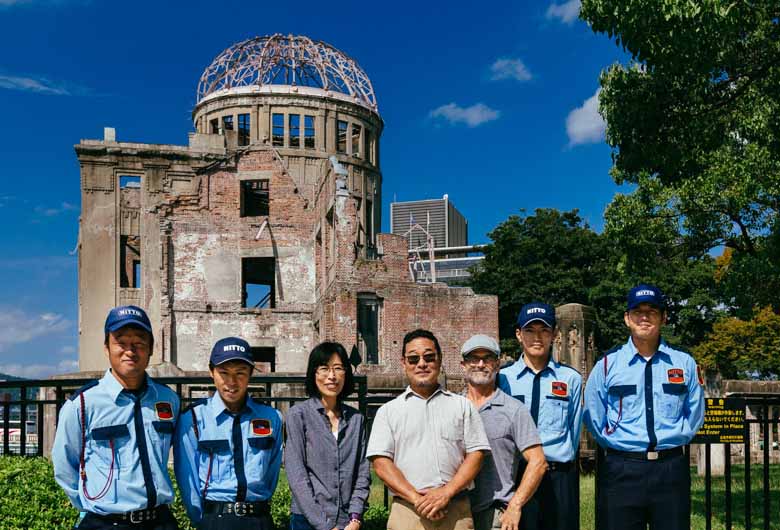 Tactile sound experience; the soundscapes are composed for amplification into an interior space utilizing a three-speaker configuration at mid-high to high volume. Audience members are given a pair of ear plugs and a balloon. The ear plugs help the audience focus on the tactile nature of sound waves. The balloon is held at finger tips while the soundscape plays. For this event, audience members can walk around the room, playing with the effects to the balloon and body proximity to each speaker. The intention is to illustrate the three-dimensionality of the recording and since the audio is a mash-up of two spaces, it’s a way to experience an imaginary space; two different locations, two different moments in time, the work of two different artists combined into one space, a neo-space of invisible architecture.

1) PEACE RESONANCE; Hiroshima/ Wendover is a three-point audio presentation that links the Hiroshima Atomic Dome to the Wendover Hangar. It’s about history, immigration, resilience and time. Peace Resonance is my portrait of what it means to be Japanese-American as it relates to post-WWII America.

“My family is from Hiroshima, Japan. They immigrated to the US in 1957. I was the first US born family member and grew up with the ‘ghost’ of their WWII history. As my art career grew so did my commitment to develop an artwork about our historical and personal connection to Hiroshima and the Atomic Bomb but it took decades for me to find a path into the subject matter.”

“When I was in the fourth grade at Wilton Place Elementary School in Los Angeles, I was in the school library looking through books and discovered Antoni Gaudi’s work in Barcelona. The organic forms and use of broken tile made me wonder if Gaudi had plagiarized the work of our local icon, Watts Towers created by Simon Rodia.

“Four decades later, I was given the opportunity to travel anywhere to do research and remembered this moment in the fourth grade. Through the guidance of a network of supporters, I was able to arrange a residency at the University of Barcelona where a relationship with many of Gaudi’s buildings was already established. In 2013, I and a crew of artists and professors from the University’s Sound Art Master’s Program entered the Sagrada Familia and conducted a three-point audio recording of the interior acoustics. Later that year, I was also given permission to conduct a similar recording at Watts Towers.”

Alan Nakagawa is an interdisciplinary artist primarily working with sound, occasionally incorporating video, sculpture, drawing, paint, performance, food and most recently perfumes. He recently completed an exhibition at Visitor Welcome Center in Los Angeles that, in part, presented a survey of work produced at artist residencies from the past five years including residencies with the Los Angeles Department of Transportation (2016-17), LA Great Streets (2017-18), the Getty Villa (2016), Smithsonian Museum of American History (2015), Cerritos College Printmaking Studio (2017), Echo Park Film Center (2017) and the University of Barcelona (2013).

Human Resources was founded in 2010 by a team of creative individuals who seek to broaden engagement with contemporary and conceptual art, with an emphasis on performative and underexposed modes of expression. Human Resources is not-for-profit and seeks to foster widespread public appreciation of the performative arts by encouraging maximum community access. Human Resources also serves as a point of convergence for diverse and disparate art communities to engage in conversation and idea-sharing promoting the sustainability of non-traditional art forms.