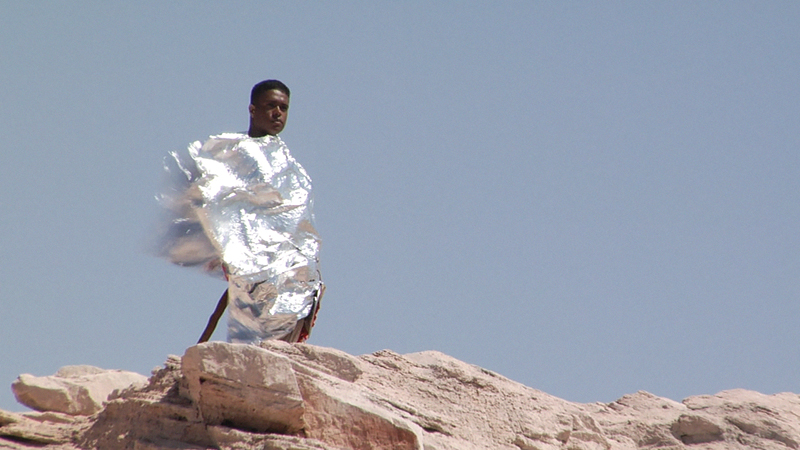 …it was ambiguous, two-faced. What was inside it and what was outside it depended upon which side of it you were on.

From November 28 through December 17, Human Resources LA is excited to present, for the first time in California, A.K. Burns’ video installation A Smeary Spot (2015). This 53-minute 4-channel video installation is the opening episode of a five-part cycle of multi-media works entitled Negative Space (2012-ongoing) that draws on science fiction, theater, philosophy, and quantum theory. Setting up a parallel cosmology, A Smeary Spot invites a dialogue between ecological fragility, marginalized bodies, and their relationship to resources.

A Smeary Spot explores the metaphorical ‘sun’ as a manifestation of power, a source of both life and death and around which the other episodes (in Negative Space) circulate. The title, is borrowed from feminist sci-fi writer Johanna Russ’s book We Who Are About To…. The sun–– “that smeary spot” –– is a dense concentration of heat and light, an organizing principle of time, place and ego. What potential emerges when we glance away from the source and settle into the blurry residue of its afterimage? With political urgency, the work reorients viewers in a ‘speculative present,’ by which we are invited to imagine an alternative future.

This work was shot in two locations: in the deserts of southern Utah and inside a black box theater, where performers deliver recitations of appropriated and altered texts that compose a loose manifesto on being. Inside this cinematic experience is a surreal narrative of bodies in transition — bodies that change, move, slip between, act and act out. Among these bodies, the land, the water, the waste pile and the theater are not simply stages upon which actions occur. They are sprawling protagonists, who, like the sun are permeating and persistent.

In a moment when the logic of political power seems unyielding, this work presents an aesthetic vision—a speculative space that unbinds us from delusional inherited behaviors, where the present categories of body, mind, land, “one” and “other” are dispersed in favor of a new relationality. Through moving image and an elaborate (6-channel) sound track, A Smeary Spot allows us to inhabit this metaphysical offering, decisively rethinking our conception of language and boundaries (political, social, bodily) and their ensuing impact in contemporary understandings of politics.